There are no products in this section

Solar power system is way more complicated than it seems. Its core elements are usually hidden from the view, so it’s a common misconception that the solar panel does all the work. But if not for the inverter which converts DC current to AC current, we couldn’t do anything with the generated electricity, because we use AC power in our households. There are different types Inverters, but solar micro-inverter are considered the top performers and here is why.

What is a micro inverter

A solar panel micro inverter is a tiny piece of electronic equipment which changes the waveform of current. Unlike a centralized string solar inverter, a micro inverter is smaller and installed right at the panel site (one inverter per panel).

Micro inverters appeared in the solar panel market quite recently, but have already risen in popularity over the standard string inverter. You may wonder what makes them so different from a conventional inverter. Well, it’s not only the size that matters. 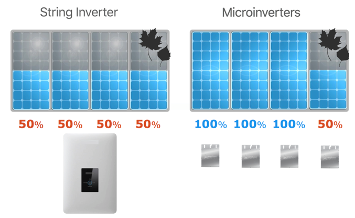 It’s a warm day in October, you are watching leaves falling from the trees and waiting for the kettle to boil. But if you have a string inverter, sorry, no tea for you today. Even if fallen leaves have affected only one panel, your electricity generation rate will shrink in a wink of an eye, because every other panel will operate at the same capacity as the hindered one. Micro inverters follow the rule of “every man for himself,” and allow you to use all your home appliances to the fullest even if something goes wrong with one of the panels.

Factoid: A study by University of Virginia researchers reported 27% more efficiency in partially shaded solar installations when using microinverters instead of string inverters.

Micro inverters are also distinct from the conventional ones by their great low-light performance. With a lower startup voltage when compared to string systems, micro inverter arrays will be producing energy most of the day, from dawn till dusk. Such prolonged activity is achieved due to the built-in optimization that matches technology with the diurnal cycle, wherever you might live.

When something goes wrong with a string inverter system, you typically need the installer to come and investigate the problem in person. Moreover, it may not even be very clear where the problem is and its root cause. Solar power micro inverters make it easier for you and the installer to monitor each panel individually and alert you about any unexpected performance issues.

In a string inverter system, there's a lot of high-voltage electricity travelling across your roof. That is potentially dangerous for you, emergency responders and others who may venture onto the roof. When DC-AC conversion happens on the panel level, there's never any high-voltage power traveling through your system. So you don't need to worry about the dangers lurking on your own roof.

Micro inverters are relatively expensive since they need to be affixed to the back of every single solar panel. They typically cost $1,000 or more than a string inverter on a standard 5kW residential solar installation. However, they allow for a much easier system expansion than a string inverter and ensure greater energy savings. It means that in a long-term, micro inverters for solar systems may turn out to be cheaper than conventional inverters. So, you get what you pay for.