Farms and ranches are where the future of American solar energy lies. The US Department of Energy projects that 90% of the later utility-scale PV capacity is likely to be installed in rural communities. The farmers already switch to solar energy faster than ever and reap the benefits of it: for them state programs and incentives can cut the costs of going solar in half. Learn more about getting solar panels for a farm with a story of a couple from Texas.

Meet Julie, a farmer from Texas

A little while ago — back in May, 2022 to be exact — I was staying at my friends’ place in Texas and had to pay a visit to a local bank. The line was unusually long, everyone was bored and I inadvertently struck a conversation with a woman next to me. Her name was Julie: a woman in her 50s, very chattery, with strong hands and back.

Little by little I learned that she and her husband have a farm in the vicinity. When she asked me what I do for a living, I said: “Oh, I am sort of a journalist. I write about green energy, mostly solar panels, you know?”
And she said: “Solar panels, huh? We actually have a system of our own.”

I wasn’t prepared to hear this — and probably started asking way too many questions for a stranger. Eventually she laughed it off. “Darling, I don’t know half of this stuff you’re asking me,” she said. “Why don’t you come over for dinner sometime? Michael loves to talk about his panels. He’ll be glad to show you around.”

And so it was settled. I came over the next week.

Meet Michael who runs his farm on solar panels

Michael is what you would expect a Texan farmer to look like. He is large with the hands of a man who works in the field all day long.

“We grow lots of stuff out there,” he says. “Corn, wheat, lots of veggies. You know, the usual. We’ve got a couple acres of grapefruit trees though, I’m quite proud of them.”

Michael’s farm is a little over 600 acres. It's a family business: he inherited the land from his father and he plans to pass it on to his sons and daughters. Julie was a girl from a nearby farm: she and Michael grew up together. The families — all the kids and kins — tend to their fields together.

“So, you came to talk about solar panels, haven't you?” Michael says. “Come, I'll show you. Ask away if you’ve got something ready.”

Of course, I had a line of standard questions prepared.
”What made you decide to go solar?”
“A lot of my neighbors did it, since it’s a bit easier for farmers. And it made sense when I sat down and did the math. Plus Texas is a windy place. At least the panels shouldn’t break, when a storm comes to visit.”

Michael leads me to the barn. There is a large system on top of it.

“How much is that?” I asked.
“Twenty kilowatts. A modest system by the standards around here. Maybe I should've bought a bigger one. But then again I might just expand this or simply get one more. Or you were asking about money?”
“Both.”
“I bought this system back in 2019. I think, all together it came to $35,000 or a little over that. But I didn’t pay that much. First of all, I got a grant from REAP. It was over $8,000 — basically, they agreed to pay for a quarter of it. Then we bought all the equipment. Julie found an installer. And then step by step I got around nine grand back through Solar Tax Credit. I think it was the last year when it was at 30%. So in the end I paid maybe half of what the system really cost.”

The Federal Solar Tax Credit did in fact decrease from 30% to 26% in 2020. However, in August 2022 it was reinstalled back at 30% and will remain this way until 2035. The idea is that you get a part of your installation cost deducted from your income tax for the year. If you get a REAP grant, you can still claim a 30% tax credit on the portion of the system that is not covered by the grant.

Solar electricity will find a lot of use on any farm. With crop fields the biggest needs are irrigation and grain drying. Dairy farms and ranches are a different story: you need to provide your animals with lighting and ventilation, plus you need a dairy storage and other equipment.

”How many kilowatt-hours do you need per month?” I asked Michael.
“I don’t know,” he shrugged. “And most farmers wouldn’t know. If you’re looking for some sort of average number, I don’t think that there is one. Every farm is different: different size, different equipment. Plus the bill changes with the season. Some months you need the pumps to work well, in others it’s time to turn on the dryer. Honestly, electricity is one of the smaller concerns for farmers. We are much more worried about diesel, for example.”

”What I do know is what this system gives me,” Michael continued, pointing to the system. “I get around 100 kilowatt-hours per day from this one — more or less. A lot more in June-July, a lot less in the winter. All of it gets used up. If it doesn’t, it goes into the grid and I still get some credit for it. If not for panels, I would use commercial electricity, right? I think, right now I pay a little over 16 cents for kilowatt-hour — not the best rate but definitely not the worst either. So with this system I get up to $16 every day. In one month it can go up to $480 and in one year it’s almost six grand, maybe five and half. When I do this math in my head, I know it was a fine choice. Yes, it won’t pay for itself tomorrow, not the next week, not the next month. But soon enough it will.”
“Good math skills.”
“I’m a farmer, son,” he smirks. “That’s all I do. I tell you, you wanna be a farmer, you’ll have to be prepared to count a lot.”

If you, unlike Michael, really want to know how much electricity you spend as a farmer, there are ways to do it. Usually an electricity bill isn’t detailed, and you don’t know exactly how much power you spend on what. Modern control panels keep count of your energy consumption and provide you with the data on how much power was spent on heating, refrigerating or went to appliances. If you have a solar system with an inverter, modern models also keep track of the energy consumption in the house.

You could also do this the old way: make a table with every appliance that you have and write down its power rating and number of hours in use. Then multiply the two and sum the numbers up. However, this chart is going to change every month and you’ll have to keep a log for at least the whole year.

There is always room for improvement. An energy audit can reveal the places where you spend the energy inefficiently. As a farmer, you could get a discount for an audit through the REAP program.

Agrisolar: planting solar panels on roofs and in fields

Back to Michael and Julie. All three of us were back at the house sitting by the table spinning tea, and they were telling me about things other farmers do with solar.

“Now, I’m a simple man,” Michael says. “I just have a small system on top of my barn, it makes my bills lower, and I’m happy about it. But you can do a lot with solar as a farmer. We’re all close, we talk, and I hear about things people try with panels all the time. Some farmers just straight up fill their fields with panels. Burton, he lives twenty miles south, had a field of cilantro, like 8-10 acres. Now he is building a megawatt solar farm there instead.”

“I was talking to Martha, our neighbor, last month,” Julie adds. “She said that they plan to, like, combine the two? They’ll have some panels on the field and she’ll plant lettuce around them.”

Lots of options are available to farmers when it comes to installing solar. A conservative approach would be to put panels on your house or a barn. Alternatively, you can build a large installation right on a field, instead of planting crops there. Essentially, you become a solar farmer this way. You can also pair crops with solar panels — this practice is known as agrisolar. Some crops do well in shade — for instance, tomatoes and lettuce. Farmers plant them around solar panels or underneath them.

As I was leaving the farm, Julie made me take a piece of cornbread wrapped in a paper napkin. Michael held out his large farmer’s hand.

“So, it’s going to be an article in a newspaper or something? Good luck with that. We’ll be needing some help with the harvest in August. Drop by if you want. We’ll put your hands to some real work,” — and he winked.

Exactly the type of thing I would expect to hear from a Texan farmer.

Choosing solar panels and brands: look for power and reliability

Every system begins with the PV modules. If you are eager to start planning your own installation, the best solar panels for a farm are:
Great solar panels for farmers come from North American brands, such as Mission Solar, Canadian Solar and Silfab. While any Chinese brand is good for building a big system, the panels can be hard to come by in the US, especially in large numbers, and they might not be prepared for American tornadoes.

Here are the panels that our engineer suggested for building a solar system at a farm. These options can be good for a small “support” system or for building your own solar farm.

MSE PERC 60 is an American-made module for small to medium installations. Mission Solar is a company from Texas so some farmers might be inclined to purchase a product made by their neighbors. Local engineers know about the weather in Texas from experience, and this panel can handle the winds of 200 mph speed.

If you’re looking to build a system of a larger scale, especially ground-mounted, consider this model. The front side of a Silfab module withstands 5400 Pa pressure from wind or snow. It’s comparable to 200 mph wind. The panel comes with a 12-year warranty that is extendable to 25 years. Performance guarantee is issued for 30 years: the panel retains over 82.6% by the end of the year 30. A great solar panel for a farm!

When installed correctly, bifacial panels bring in 30% more output than standard modules with the same power rating. They are great for building large ground-mounted solar farms. A single BiHiKu panel from Canadian Solar can provide up to 585 Watt output. The panel can handle 170 mph wind and works well in cloudy conditions.
Illustrations – Natalya Absalyamova 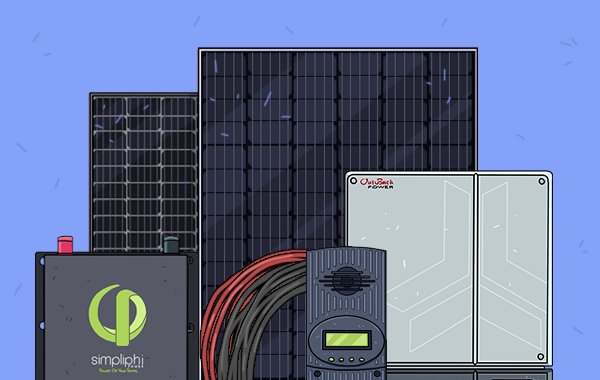 Get a quote for your solar system

Save your time and money with ready-made solar systems. Choose the one which seems to be the best fit, and our engineer will adjust the system to your needs.

Picking the best solar panels for a sailboat: Buyer’s guide